Well here's a look at the latest page, in pencils and then inks. I'm redrawing 4 pages or so of a strip originally crafted by the great Cam Kennedy: 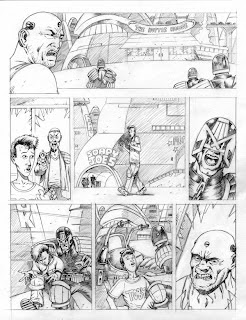 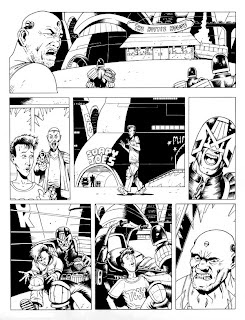 Well, this has NOTHING to do with comics, but it is VERY cool... if you've never heard of the UFC, this will mean absolutely nothing to you:

I went shopping this morning with my girlfriend in the Trafford Centre, Manchester. I was in HMV looking at DVDs, and I saw this guy who was the spitting image of Rampage Jackson (who is very famous in the USA - he's the UFC Light-Heavyweight Champion of the world!) standing in line to buy something! I was thinking, there's no way that's him... then I turned round, and Michael Bisping (British UFC fighter) is stood next to me! He said "haha, bet you thought there was no way that could be him!" I was amazed, both these guys out shopping and I bumped into them. They were both really cool, very funny, and their friend took a couple of pics on my phone for me. They're both fighting at UFC 75 next week, at Wembley Arena.

So anyway, here's a couple of pics of me looking like a dork next to two of the UFC's top fighters! 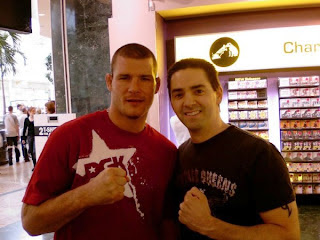 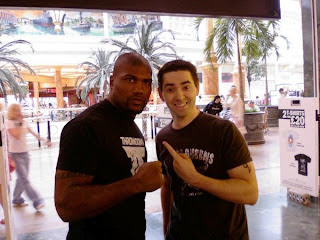 I'm going to chronical my efforts to become a Pro comic artist in this blog! The road will be long, hard and filled with thrills and spills... and long boring hours sat at the drawing board. My first target is going to be 2000 AD - the galaxy's greatest comic. I've been a major Judge Dredd fan since I was a nipper, and to draw Old Stoney face would be a dream come true, so I've begun work on my Dredd sample pages.

First attempt will be to show the 2000AD editor Matt Smith my work at the 2007 Birmingham Comic Show (Oct 13th I think it is), so I'm working on a (hopefully strong) portfolio for this event. My trusty sidekick, the beautiful Sharon will be accompanying me on this epic quest... this will be her first comic con, so I'm going to have to prepare her for the multitude of fanboys who will gawp at her, excited by the prospect of an actual real girl in their midst. Should be fun!

So here are a couple of pages from my portfolio... I may colour a few as well, if I have time - but I'm mainly looking at b/w stuff for now: 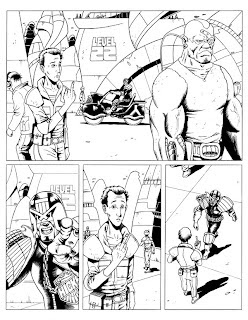 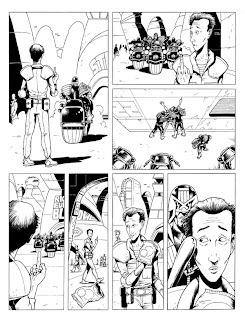