Out now! Latest issue of Kick! hits the shelves, complete with my latest Game of My Life! strip (Lampard this month!). Artwork (c) Attic Media Network: 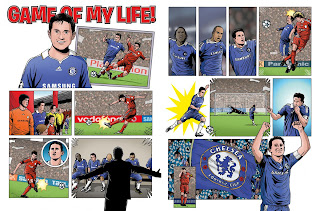 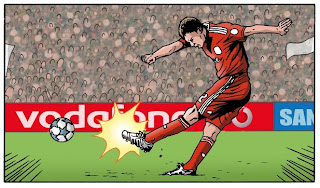 Well it's been a busy few weeks - my deadline for the latest Kick! football strip is this Thursday, so I've been hammering away at that, as well as a new cartoon for Global Integration and of course more Project Luna work.

In one week's time, the Bristol comic expo kicks off - and sadly I won't be there, despite looking forward to it for a year! My bad back problems have forced me to cancel. The prospect of a 3-hour train journey with crippling back pain doesn't appeal - and after researching the train tickets, I'd have to change 3 times on the homeward trip on Sunday! Running about with portfolio and bags, trying to find the right platforms for connecting trains with a knackered back - no way. We considered staying until Monday, when you can get direct trains, but the costs just started getting silly - as Sharon pointed out, we could have a European holiday for the same price. I definitely can't drive that far right now, so we had to cancel.

I'm looking forward to seeing everyone else's photos and con reports! I'll be making the effort next year for sure, and we even have plans to bring Scott James over from the States for the occasion! After many months chatting online to the likes of Scott, Cy Dethan and Martin Hayes, a face-to-face meeting/drinking session is long overdue!

I'm aiming for the BICS con in Birmingham later this year, so hopefully my plans won't be scuppered (is that a word?) for that one, and we should have a preview booklet of Luna put together for the event - watch this space.

In other news, Sharon has given me a crash-course in Adobe Illustrator, and I am now capable of doing my own comic lettering - something I've been threatening to learn to do for years. I have no idea why, but I really enjoyed lettering the first 8 pages of Luna, and may offer my services out as a letterer at some point in the future! 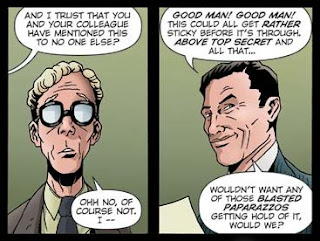 As soon as the latest Kick! strip is done, I'll be right back on Luna duties - the back ache is thankfully getting better at long last (since I stopped going to the Chiropractor coincidentally...) so I should be firing on all artistic cylinders again soon.

Hmmm... that was possibly the longest blog post so far... who knew my life was so interesting, eh?