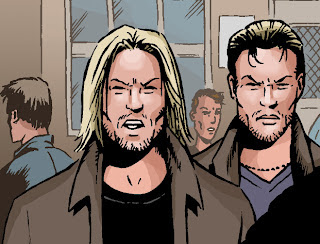 Well it's Boxing Day morning - Sharon bought me a fantastic A2 Lightbox for Xmas, and I have just solved a comics-colouring mystery that has annoyed me for YEARS!!!

How do they colour the actual line-art in different colours? Like when that GENIUS Dave Stewart makes Guy Davis' characters stand out from the background so well in BPRD comics... well I finally sussed it this morning - see attached image. The foreground characters have solid black line-art, whereas the background line-art is brown, giving a nice depth-of-field appearance. This may not sound like a big deal, but it bloody is to me!!!! Now I can colour fire with nice orange lines, etc...

In other news, I've had to work during this Xmas week, as I received a new script from Manitowoc (a crane manufacturer) so I've managed to almost finish the drawing side of things - next up is colouring and adding all the company logos. I've also just finished three more illustrations for Easy Jet, as well as a Xmas commission for one of my guitar students.

I'm due to start work on an exciting project which will be pitched to Image, etc sometime in the new year - stay tuned for that!! I should be starting character designs as soon as I finish the Manitowoc job in the next couple of days.
Posted by Jim Boswell at 13:03 No comments: 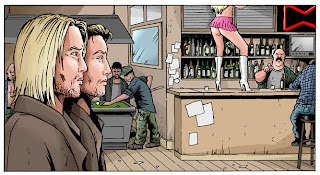 Now I have a little "me" time for drawing, I decided to practice my new inking skills a little more - I'm really getting into the brush and dip-pen approach.

I had this single page pencilled, from a story written by someone who's name I completely forget now... anyway, it was begging to be inked so I went ahead. I was really happy with it, so thought I'd colour it as well, in my new "blocky" style - that is, solid colours for the most part, rather than airbrushing absolutley everything!!! I feel this style has more impact, but is easier on the eye for storytelling - not to mention being quicker than all that airbrushing.

So here's the first panel - I'll post the rest when it's done.

In other news, I have a new commission to do the artwork for two superhero t-shirt designs, which I'll post if I get permission (when I've done them!).
Posted by Jim Boswell at 20:10 No comments:

Well I've actually had to WORK hard this past week... tight deadlines on the Revolution Vodka illustrations - 3 covers and 13 cartoons, all in colour - and I've never had to do so many caracatures before! Added to my repertoire this week were Amy Winehouse, Pete Doherty, Lily Allen, Gordon Brown, David Cameron, Nigella Lawson, Gordon Ramsay, Paul McCartney & Heather Mills, Jamie Oliver, Jeremy Clarkson, Richard Hammond, Sharon Osbourne, Dani Minogue, Sean Connery, Roger Moore, Pierce Brosnan, Victoria Beckham, Kate Moss - the list goes on! I have big respect for caracature artists, some people just ain't easy to draw... particularly tough was the new Bond, Daniel Craig - I just couldn't get that guy right - got there in the end though (I hope). I'll post some of this work here when it goes to publication (this is all for the new menu for Revolution bars around the UK).

I've inked all of the cartoons with a brush and dip-pens, and it's gone surprisingly well. I will definitely be doing this from now on, it adds a lot of life to the artwork - not as accurate as a pen, but adds "character" - I just wish it was quicker! I've been looking at Joe Kubert's stuff, and I just love what that guy can do with a brush, he makes it look so easy. I should be starting some new comic pages soon in some form or other, and also practicing my inking. Stay tuned!

In the meantime, here is another character I drew for the ICO website (before I started experimenting with brushes, etc): 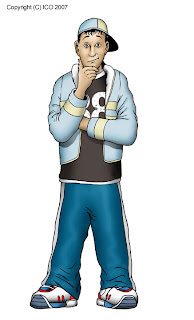